The information you provide will be used in accordance with the NAV Alliance Privacy Policy. You may opt out at any time. 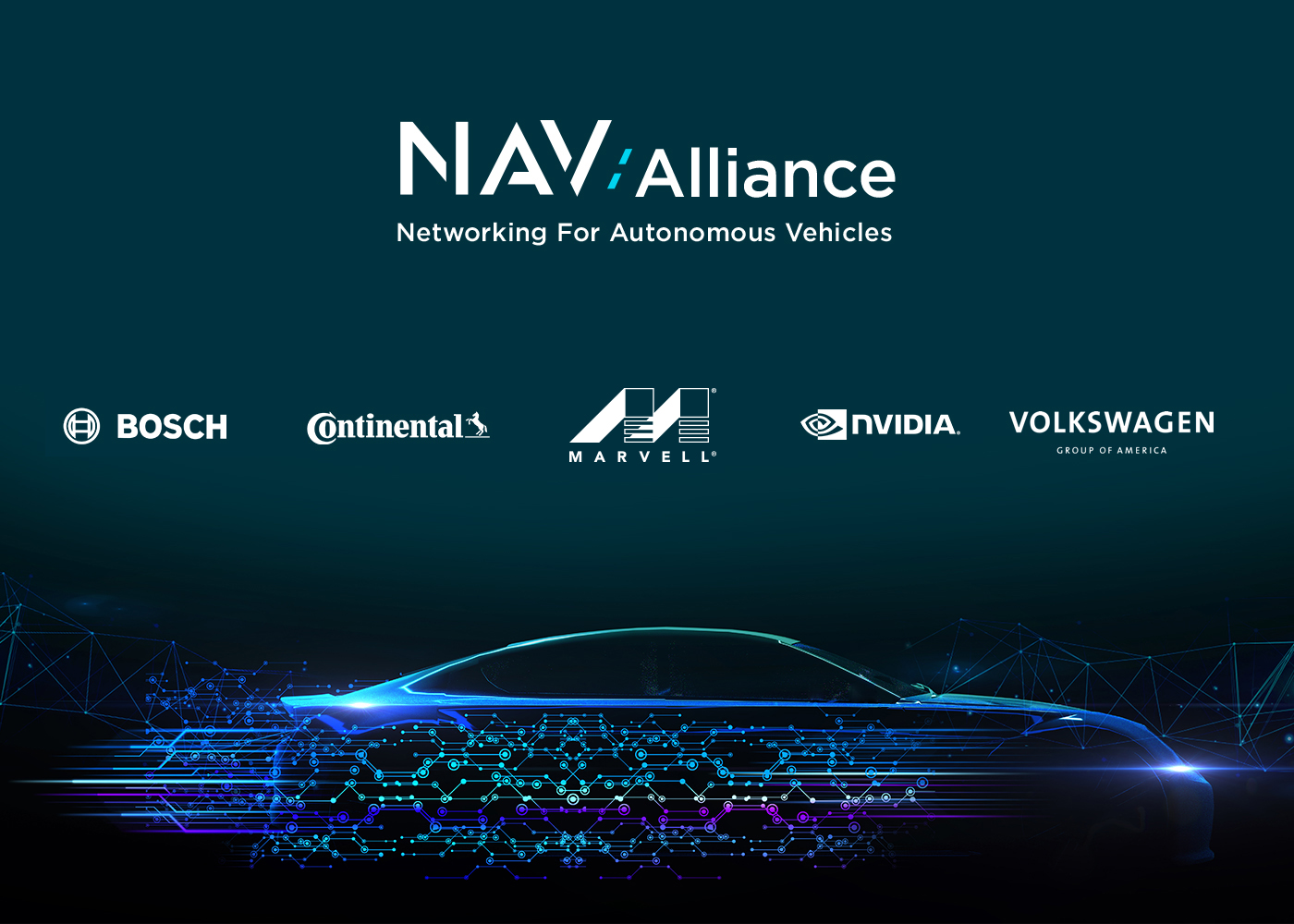 San Jose, CA – June 07, 2018 – Autonomous driving is creating a need for a new breed of in-vehicle networking solutions that can transmit data between the increasing number of high-resolution sensors, cameras and processing engines at blazing-fast speeds. Today Aquantia, Bosch, Continental, NVIDIA, and Volkswagen announced the formation of the Networking for Autonomous Vehicles (NAV) Alliance, to drive the ecosystem development required for the next generation of Multi-Gig Ethernet networking in vehicles.

Self-driving cars have become data centers on wheels constantly analyzing vast amounts of data to endeavor to ensure the safest and most secure experience for passengers, pedestrians, and other vehicles.

“Redundant and diverse AI algorithms are the key to level 5 automation. However, the volume of data generated by multiple types of sensors (camera, radar, lidar, ultrasound) can reach 32TB every 8 hours – that level of data transfer calls for a new breed of ultra-high-speed networks, including Multi-gig Ethernet. The NAV alliance will catalyze the development of a reliable next generation of networking platform for self-driving cars,” said James Hodgson, Senior Analyst Autonomous Driving, ABI Research.

NAV alliance’s members, leaders in their respective segments as auto manufacturers and technology providers, are joining together in an effort to shape the future of in-vehicle networking technologies as society prepares for the paradigm shift to autonomous driving.

Akin to a very advanced nervous system, this next-generation networking architecture is based on an array of ECUs, CPUs, GPUs, high-definition cameras, sensors, gateways, and storage devices, all connected through a high-speed, Multi-Gigabit/s Ethernet network that works to seamlessly move data throughout the vehicle securely and reliably.

Founding members will focus on these core objectives and expand the NAV Alliance membership roster in the coming months to include additional automotive suppliers and manufacturers.

“Aquantia has been driving the Multi-Gig Ethernet revolution in other markets for several years. Now, the in-vehicle network for autonomous driving requires a level of high-bandwidth functionality that was previously the domain of the most demanding data center applications. The creation of the NAV Alliance and the focus on Multi-Gig Ethernet will help drive strong industry standards that can ultimately change the role of transportation in society.”

“Making fully automated driving and the vision of an accident-free future reality depends to a crucial extent on seamless in-vehicle communication. To help fulfill the level 4/5 requirements of the NAV Alliance’s development and testing work, Bosch supplies vehicle computers, central gateways, and high-resolution cameras and sensors. Together with our alliance partners, we are therefore contributing to the creation of a standardized network that is safe, reliable, and redundant, and helping bring autonomous driving to our roads.”

“As a leading technology company, Continental continuously conducts research in order to further enabling technologies that will be the future of electrified and autonomous vehicles. In-vehicle high speed data communication is the key for faster introduction of new vehicle system architectures as enabler for future vehicle solutions. Continental is convinced that the collaboration with the NAV alliance partners fosters and paves the way for the next generation of in-vehicle high speed data networking.”

“Autonomous vehicles require an onboard AI supercomputer, architected for functional safety, capable of processing vast amounts of sensor data through redundant and diverse deep neural networks and algorithms. Multi-Gig Ethernet has a proven track record for interoperability and scalability, making it a natural choice for automotive connectivity, delivering critical data from the sensor suite to the vehicle’s AI brain.”

“Volkswagen Group of America is pleased to join the NAV Alliance as a founding member because we are aiming to provide the best self-driving experience for our customers. The Volkswagen team is looking forward to collaborating with other alliance members to advance the safety and ease of use for autonomous vehicles while bringing them to market faster.”

NAV Alliance was created to provide a platform for the automotive industry to develop the next generation of in-vehicle Network infrastructure for autonomous vehicles and facilitate wide deployment of networking technologies and products. The alliance was founded by leading vehicle manufacturers, technology suppliers and networking players in the automotive market, sharing the goal of developing the ecosystem that is required for next-generation Multi-Gig Automotive Ethernet networks in the vehicle.

NAV ALLIANCE and NAV are trademarks and certification marks of NAV Alliance, Inc. (or its licensor) in the United States and other countries. Unauthorized use is strictly prohibited.